Waste not, want not

By Caddie Digital on June 2nd, 2017 in People and community 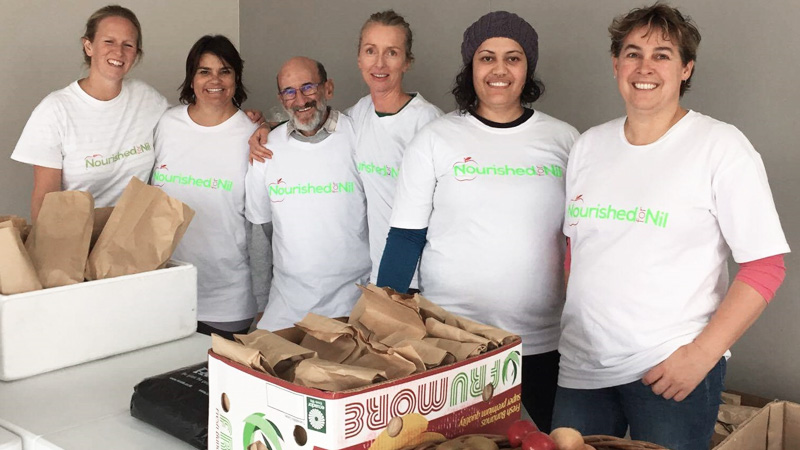 When it comes to minimising food waste we can all do our part; shop smart, only cook as much as you need and eat leftovers, among other things.

But Havelock North women Christina McBeth and Louise Saurin (pictured here with their key team of volunteers) have taken things to the next level with their food rescue charity Nourished for Nil.

Thanks to their work, cafes, bakeries, supermarkets and private residents get to make better use of their unwanted food, while hundreds of people get help through donations of food each day.

Christina and Louise started the charity in February after meeting – as one does these days – on a Facebook group. “We had seen this done around New Zealand and overseas. We knew it could work,” Christina says.

They began by cold calling cafes and bakeries in Havelock North and Hastings to find out what they did with their unsold food. “We were horrified to find out a lot was going to pigs.”

They quickly found support from businesses and had Countdown come on board two months later. Fruit pack houses and growers also began making contact with offers of fruit, as did residents with extra home-grown produce.

The charity opens its doors from 4.30pm to 5.30pm during the week, with around 10 volunteers turning up each day to lend a hand. “We have such a fantastic standard of volunteers. We are very lucky,” Louise says.

Because the primary aim is to reduce food waste, those making use of the service are not required to justify why they need help. “We don’t ask questions and we don’t judge,” Louise says.

Toni Bye, Marketing and Communications Manager at 3R Group, has been volunteering for Nourished for Nil since they started. “3R let me finish early one day a week as part of our Good Friday leave which allows us to have paid time off to do charity or community work. I then drive around to the cafes in Havelock North who are taking part, pick up their delicious leftovers and drop it back to the depot.

“Staff at the cafes often ask about how many people come and are always amazed to hear that Nourished for Nil feeds between 100 and 180 people a day! It’s such a buzz for them to feel it’s making such a difference not just to landfill but to individuals in the community.

“It’s a privilege to help out in this small way, but additionally we’ve been able to put Louise and Christina in touch with like-minded business, such as Bex Bloomfield at Little Red Robot design and Sarah Bicknell at Brebner Print who have produced their flyers free of charge. And at the June event, they received several offers of support from attendees.”